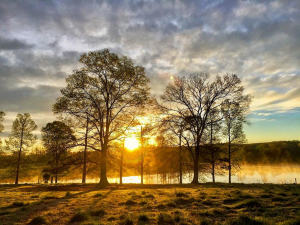 On March 16, 2019, Stephen Rolfe Powell left this world. A native of Birmingham, Alabama, Steve’s southern drawl will forever be heard delivering silliness and encouragement in the ears of all who knew him.

Steve was the loving husband of Shelly, the indefatigable father of Piper and Oliver, and the devoted brother of Pam. He was a family member, too, to his many friends.

Steve’s beloved friends are necessarily energetic, because being Steve’s friend kept one on the move. His weekly tennis matches, physical sculpting of hot molten glass, and insatiable drive to grow and build on his farm, were all activities engaged in with people he cared for deeply.  While there is no award for growing okra, Steve has a long list of awards and accomplishments reflecting his other passions and activities.

Steve was a truly inspirational professor and leader among artists from Centre College, where he: founded the glass program, built two amazing hot working studios, worked with commercial funders and international glass experts, and created beauty every day, since 1983. He was the mentor and teacher of dozens of artists around the world, who carry on teaching, sculpting, blowing glass, and bringing various objects and ideas to life through dynamic and dedicated craft.

Steve was recognized as an amazing teacher, officially, many times, and unofficially, thousands of times.  He was named Kentucky Teacher of the Year in 1999 and 2000, and given the Acorn Award by the Kentucky Council on Post-secondary Education in 2004, and the Distinguished Educator award from the James Renwick Alliance in Washington, D.C.

Steve’s artwork was regularly awarded accolades and was exhibited around the globe. Some of his more notable awards included: The Artist Award by the Governor’s Award in Arts (2010) and The Sixth Annual Rude Osolnik Award for Kentucky’s Most Accomplished Community Craftsperson in 2001. He was part of the 2002 Winter Olympics, where he exhibited his world-class glass sculpting methods, and, in 1998, he was featured at the Venezia Aperto Vetro in the city of glass, Venice, Italy.

Steve didn’t stop at making gorgeous glass sculptures with fantastic names, though.  He went on to co-produce a film, LINO TAGLIAPIETRA: GLASS MAESTRO, and maintained a rich and nurturing friendship with Lino between Danville and Murano, Italy. In 2005, he authored a book (STEPHEN ROLFE POWELL: GLASSMAKER) and it was granted the Award for Overall Excellence by The South Eastern Library Association in 2007.

Steve accomplished all of these things while maintaining his own humanity and showing kindness and joy. From working in a school and Prison Art program as a young graduate of Centre college, to launching his glass-focused career after completing his Masters in Fine Arts at Louisiana State University, he did it all with a smile, easy manner, and charm. Centre awarded him the Distinguished Alumnus Award in 2003, and named him to the Sports Hall of Fame in 2011. Indian Springs School named him the Outstanding Alumnus, in 2002.

While the world has lost a great light, his spirit and glow bless us still.

Close family and friends will be gathering for a private ceremony this week.

In lieu of flowers gifts may be made to the Stephen Rolfe Powell Memorial Fund at Centre College at 600 West Walnut Street, Danville KY 40422.

A Centre celebration of Stephen’s life will be held in Danville in the coming months.

To send flowers to the family or plant a tree in memory of Stephen R. Powell, please visit our floral store.

You can still show your support by sending flowers directly to the family, or by planting a memorial tree in the memory of Stephen R. Powell
SHARE OBITUARY
© 2023 Preston Pruitt Spurlin Funeral Home. All Rights Reserved. Funeral Home website by CFS & TA | Terms of Use | Privacy Policy | Accessibility